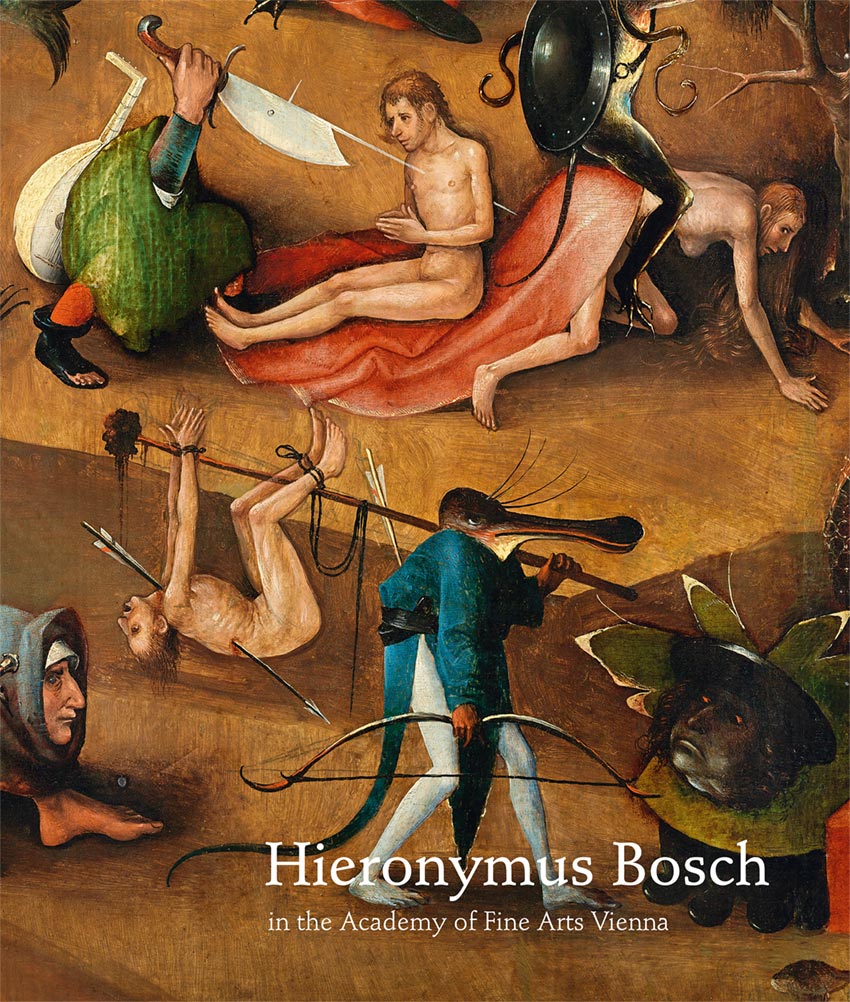 Hieronymus Bosch in the Academy of Fine Arts Vienna

[…] Bosch's triptych radically alters that Judgment layout. A dark, bare setting with glowing fires along a high horizon fills this nightmarish vision, in a space linked closely between the center panel and right wing. Bosch's heavenly realm, significantly smaller, hovers a blue glow high above the land. While angels still blow trumpets around a frontal, central, red-robed Christ on a rainbow, the apostles kneel farther away from him, and the Virgin and St. John appear outside his enfolding glory. Heaven seems very distant, and Mary and John impotent as intercessors.
At first, Bosch's Judgment seems lacking a heaven entirely, but it is small and barely visible, placed at the upper corner beyond Christ's right hand, a golden glow open beneath blue empyrean. Beyond outstretched trumpets, tiny soul figures ascend, borne up by angels. All balance has disappeared here; very few elect souls are saved. Most area shows a characteristic Bosch Hell scene instead of bodies in resurrection. Instead, squads of devils administer physical tortures of naked humans, often tormenting them with their own instruments of sin-hunters hunted, gluttons force-fed, and sex now shared with demons. Devilish weapons pierce many victims. All these individual punishments unfold against a terrible, dark, icy world with no escape.
Bosch's vision of Hell resembles a popular late medieval text, Visio Tondali, a trip by an Irish knight to the afterlife, mostly Hell, widely translated from its Latin original (a 1484 Dutch text printed in Den Bosch). Like Bosch's Vienna triptych, in Tondale's Hell, the punishment fits the crime, and both fire and ice with beasts in gloom impose varied punishments on sinners. The Vision even includes a view of the gate of Hell and Lucifer, just as Bosch ends on Vienna's right wing with a dark, glowing, frontal figure with red limbs and a tail, who stands under an arch of noxious toads. While the artist does not literally illustrate the popular Tondal text, he too remains fascinated with Hell and with demons that punish sin. Yet in the Vienna triptych Heaven is much smaller than in Memling or most other Judgments, while the Tondale text also includes a visit to Heaven, where several different levels of goodness are justly rewarded. […]